In previous article I described simplified solution of how to implement search functionality (for eshop or similar) using Google Cloud Platform Products, namely using Search API which is part of Google App Engine Standard. In this article I will describe solution using Cloud Datastore as storage. Most of introductory explanation is written in previous article, thus I will focus here only on describing implementation of search functionality.

Just for reminder, task description goes like this: "Imagine you are eshop and you want to implement autocomplete of you product description functionality, so when users type in search box some words, they will get products which contains those words. How would you do it on GCP to be scalable, fast etc..."

Repository for this as well as previous example is on Github.

Cloud Datastore is NoSQL database which was first introduced as part of Google App Engine in 2008 and then in 2013 as standalone product on Google Cloud. Since it's NoSQL, that means it's scalable but with some restrictions in comparison with SQL databases. Most notably related to text search is the fact that there is not possible to do "LIKE" or Regular Expression query which does partial text matching and would be suitable for our text search. That means that if you want to query and do text search it needs to be exact match. This implies that there will be needed some customization and manual work to prepare data to be searchable.

Some properties of datastore:

I am using again Google App Engine Standard with Python. Like I mentioned, Datastore API is part of GAE SDK, i.e. it's straightforward to use it and expecially with NDB library (there is also official python client library https://googlecloudplatform.github.io/google-cloud-python/latest/datastore/client.html which can be used anywhere). So database model I created looks like this:

I added few extra fields like price, type, url... Like I wrote text search in Datastore needs extra customization to work properly, so here are the steps:

Regarding backend and data upload, everything is more or less the same as in previous article. Uploading of 1.2M rows from csv file took 2.5 hours, I did it similar way as with Search API, althought for Datastore there are no restrictions regarding frequency of operations. It could be faster if I used concurrent requests, but I didn't bother with that this time. 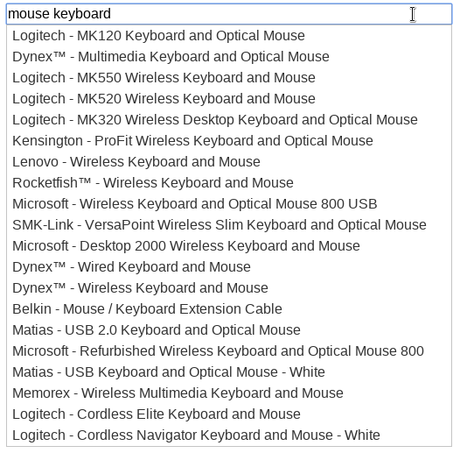 Using same configuration like in previous example, 2000 users with 10 users per second hatch rate took few minutes to reach and still running for a few minutes with max number of users. It made ~165k requests with Median 38ms and Average time 69ms. Overall Datastore looks like faster storage than Storage API. This could be related to the fact that fetching time of Datastore is related to the number of objects it's retrieving and if it doesn't retrive any or few it could be faster. After tests I realized that during upload I removed alpha numeric characters and I used those as input in load test for which cases it didn't return results. Of course also in this case, some caching could speed up response. 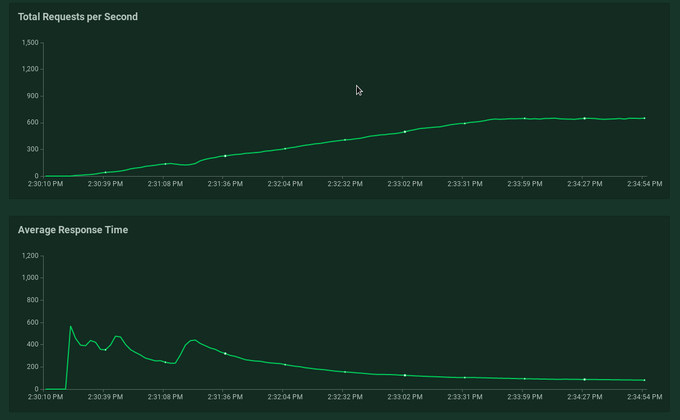 And number of users through time. 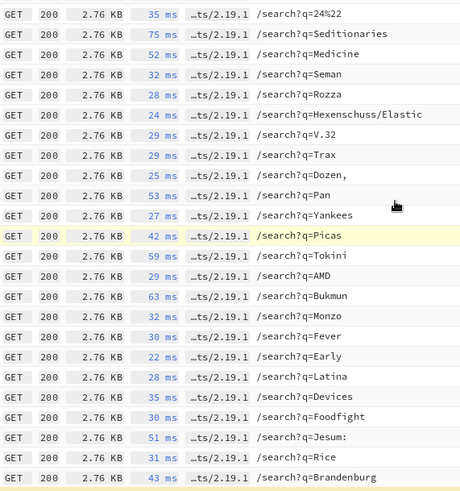 Google App Engine instance number through out the test.

Total costs for this test were ~4$. All is Datastore related, 1.07M Write operations for 1.89$ and 3.6M Read operations for 2.13$, App Engine was for free and load test Kubernetes Cluster I didn't count.

In conclusion: Datastore is viable choice for text search although with limited text search capabilities but offers easier integration with other probable database models.